Want to find out more about the Maritime Mile? Explore the areas and neighbourhoods within it, from the modern City Quays, to the maritime heritage of Sailortown, and across the river to the bustle of Titanic Quarter and Innovation Quay.

Belfast Harbour was first established in the area now known as City Quays, where the rivers Lagan, Farset and Blackstaff converged. The first quays were built here for early merchants trading linen and other commodities. Modern Belfast retains much of its early maritime heritage, and the area once dominated by shipyards is now one of Europe’s largest waterfront regeneration sites with millions of visitors every year, and a busy port handling millions of tonnes of cargo.

The area is currently being regenerated from old shipping warehouses and port operations into modern office blocks and hotels. The modern City Quays offices now house tech companies, legal firms and the UTV studios. The AC Hotel has stunning views across the waterfront, and celebrity chef Jean-Christophe Novelli has his signature restaurant there. Much of the early heritage of the area has been retained from the Clarendon Dry Docks, to the stunning Harbour Offices. Dating from the 1850s, the Harbour Offices have a heritage room detailing Belfast’s emergence as a major port and the city’s subsequent growth and development as an industrial hub. Inside you can also see the Titanic Captain’s table, due to travel on board but missed the iconic liner’s fateful journey.

The nearby Clarendon Docks are the oldest remaining docks in Belfast Harbour, built in the 1800s, and though no longer used, are an important link to Belfast’s past. They were constructed by Belfast’s first commercial shipbuilder, William Ritchie, beginning hundreds of years of innovative ship design and construction in the Harbour. Belfast would go on to have some of the most productive shipyards in the world, with the biggest dry docks in the world.

One of Belfast’s earliest remaining quays, Donegall Quay was built in the early 1800s and named after the Earls of Donegall, one of Belfast’s original landowning families, also commemorated by Donegall Square, surrounding City Hall.

A walk along Donegall Quay offers the best views of Belfast – you can see out towards Belfast Lough, across to the iconic H&W cranes, Titanic Belfast, and upriver to the city centre. City Quays also includes the park around the Big Fish sculpture, Belfast’s salmon of knowledge, which is the starting point for the Maritime Mile. Keep an eye out for the Sammy the Seal sculptures, marking the seal colony that still lives in Belfast Harbour.

Sailortown is the oldest remaining residential area with links to the Harbour and its dockers, and once had over 5,000 people packed into its small, terraced streets. The area was where dockers and immigrant families settled while seeking work in the increasingly busy shipyards and docks. The men worked on the docks or went to sea while the women looked after families and found work in the linen mills. An influx of Italian immigrants in the 19th century led to one area of Sailortown being called Little Italy. Many of the Italians were in Belfast to carve the marble for buildings such as City Hall.

The streets here have names reflecting their maritime history, such as Princes Dock Street, Pilot Street and Corporation Street – where the Harbour has its offices. Much of the area has been redeveloped into apartment buildings and a motorway, but some key heritage remains such as St Joseph’s Church, a Grade 2 listed building built in the 1870s, which will soon be open for activities and will showcase its rich Maritime Heritage through photographs, stories, film and exhibitions. Known as the Chapel on the Quay, its spire was the first and last sight of home for generations of seamen.

Sailortown is also home to Sinclair Seamen’s Church, a maritime themed church built for its seafaring congregation in 1857. It is decorated with an array of maritime items, with a pulpit shaped like a ship’s prow, a binnacle font, and a WW1 ship’s bell that calls the congregation to worship.

Get to know the Mile from the local neighbourhood experts – Read Alissa’s story.

Facing Donegall Quay, the Queens Quay is home to the Odyssey Pavilion & SSE Arena. The Odyssey was constructed in time for the Millennium in 2000, and is home to Northern Ireland’s largest indoor venue, located on a site once overlooking the world’s largest shipyard. The SSE Arena is home to Belfast’s one and only professional ice hockey team, the Stena Line Belfast Giants. The season promises plenty of fast and furious action that will have you on the edge of your seat, from bone-crunching hits to last minute game-winning goals

Also located at the Odyssey Pavilion is the innovative W5 Belfast, Ireland’s award-winning science and discovery centre. This interactive science centre is perfect for children and families, encouraging learning about science in a fun and engaging way. It is due to reopen in 2021 with brand-new zones and an exciting new addition – the AC45 Vessel. This 45-foot yacht, donated by Artemis Technologies, was one of the fastest yachts on the planet and will be suspended from the ceiling as part of W5’s immersive new experience.

Get to know the Mile from the local neighbourhood experts – Read Belfast Giant Matt Pelech’s story.

On the Titanic side of Belfast Harbour, the Abercorn Basin and Hamilton Graving Dock were constructed in the 1860s following redevelopment of the River Lagan and Harbour area. Much of the area, originally called Queens Island, became the site of the Harland and Wolff shipyard which was one of the world’s largest shipyards, employing 30,000 workers. As the shipbuilding industry changed in Belfast, the area is now the biggest waterfront redevelopment site in Europe with thousands of visitors, workers and residents.

Much of the key heritage has been retained, with the H&W Drawing Offices repurposed into the stunning Titanic Hotel Belfast, and the iconic Titanic Belfast built on the very slipways where RMS Titanic was built and launched. The Harland and Wolff cranes, icons of Belfast’s skyline in the background, are still in use today as H&W now undertake ship repair and offshore and maritime engineering. To really get a sense of the past, you can go on board the SS Nomadic, RMS Titanic’s little sister, now included in the Titanic Belfast visitor experience.

The Public Records Office for Northern Ireland is located in Titanic Quarter, along with Belfast Metropolitan College where over 2,000 students study a range of courses from science and technology to media and tourism.

Titanic Quarter has also provided the perfect backdrop for many popular TV series and movies. If you are fans of Line of Duty some of the open spaces on both sides of the river may seem familiar. The magnificent Titanic Hotel, formerly H&W Drawing Offices, has featured on both the big and small screens including Lost City of Z starring Robert Pattinson and Charlie Hunnam. The Drawing Offices once hosted Jackie Onassis and Queen Elizabeth II visited the H&W shipyard several times for ship launches, so there’s a long history of famous visitors to the area! Titanic Studios, located at the end of the Titanic slipway, is one of Europe’s largest filming studios where City of Ember, Your Highness and all eight series of HBO’s fantasy series Game of Thrones were filmed. Follow the Glass of Thrones stained-glass window trail to relive many of the most memorable scenes and characters from the show.

Get to know the Mile from the local neighbourhood experts – Read former H&W employee Rodney’s story.

At the far end of the Maritime Mile is the area we like to call Innovation Quay, home to Catalyst Inc, an innovation community of researchers, tech start-ups and entrepreneurs specialising in everything from diagnostic systems to cyber-crime. Queen’s University’s ECIT Campus is located here, where over 200 academics, students and engineers are researching technologies to create the digital society of the future. The modern buildings overlook the innovation of the past though, with the Thompson Dry Dock at the heart of Innovation Quay.

Once the largest dry dock in the world, holding 21 million gallons of water, it was built to house the large passenger liners being constructed by Harland & Wolff, RMS Olympic & Titanic. Visitors can now descend 50 feet to the dock floor and see the original dock gate with its thousands of welded rivets, and the original pumping machinery in the Thompson Dock Pumphouse. HMS Caroline is also located here, floating in the Alexandra Dock, which was the world’s largest dry dock until the Thompson Dock was built twenty years after it. HMS Caroline is the last surviving ship of WW1’s Battle of Jutland, and now a floating museum.

East Belfast or EastSide, was home for thousands of shipyard workers who lived in the rows of terraced houses built for the workers and their families. The Yardmen sculpture on the Lower Newtownards Road pays tribute to the workers who built more than a thousand ships for Harland & Wolff, as well as other smaller shipyards such as Workman Clark. East Belfast was also the location for the Belfast Ropeworks, established by Gustav Wolff, and huge linen spinning mills. Whilst these mills may have now closed and factories been replaced by housing, EastSide is now thriving once again as a hub of culture and creativity. You can catch glimpses of the heritage of the past through buildings such as Templemore Baths – the Victorian public baths frequented by many shipyard workers over the last hundred years, or the Portview Trade Centre, a former linen mill now home to architects and craft brewers.

The area has produced lots of writers, poets and musicians, with perhaps the most well-known writer of all, CS Lewis, commemorated with the CS Lewis Square, a stunning new public park featuring seven bronze sculptures from ‘The Lion, The Witch and The Wardrobe.’ The Eastside Visitor Centre is located next to C.S. Lewis Square, and is your gateway to East Belfast. Packed full of information on EastSide’s key attractions, famous faces and places, you can sample local delicacies from JACK Coffee Bar and discover all that’s on offer in East Belfast.

A highlight of East Belfast has to be the Connswater Community Greenway, a 9km linear park through the heart of EastSide. From here you can follow a number of self-guided trails, walk in the footsteps of George Best’s childhood, soak up the scenery which inspired some of Van Morrison’s most famous songs or follow the EastSide Lives Heritage Trail which tells the story of East Belfast through the stories of local people.

Not far from the City Quays side of the Maritime Mile is the Markets area. Located at the edge of the River Lagan, the Market Community is one of the oldest working-class communities in Belfast. It was once a mix of residential, commercial, and industrial sites, from various markets, to linen mills, distilleries, and foundries. St George’s Market, a covered Victorian market building, was constructed in the 1890s, on the site of a market dating back to 1604. St George’s is still in use today as a general market, selling some of the country’s best local produce and well worth a visit.

Much of the area has been redeveloped into modern housing and office buildings, and there are plans to embrace areas such as the tunnels in the archways under East Bridge Street. There are even stunning examples of Georgian architecture in the nearby streets. 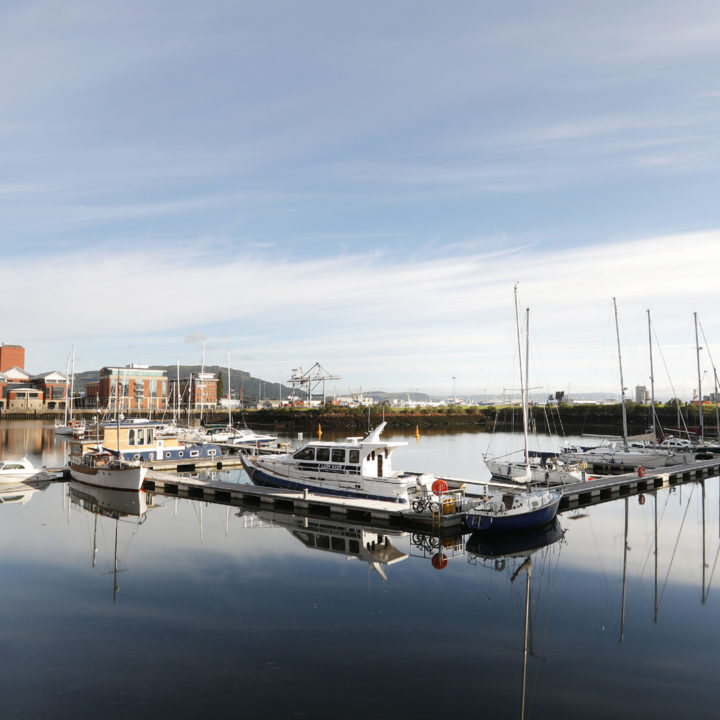 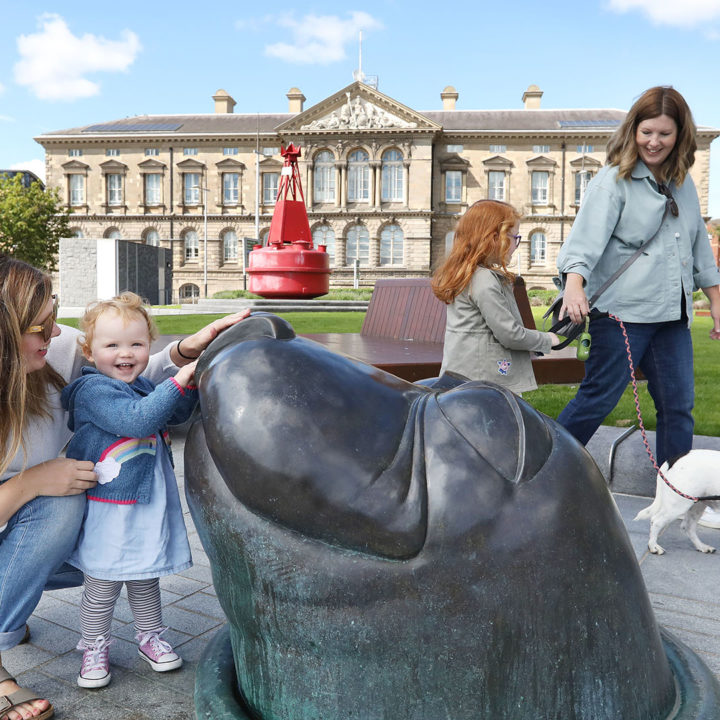 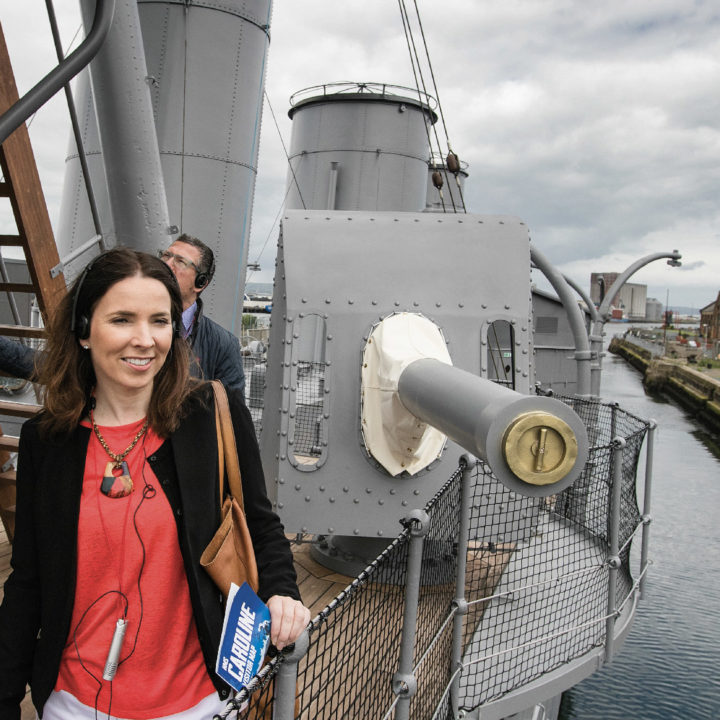 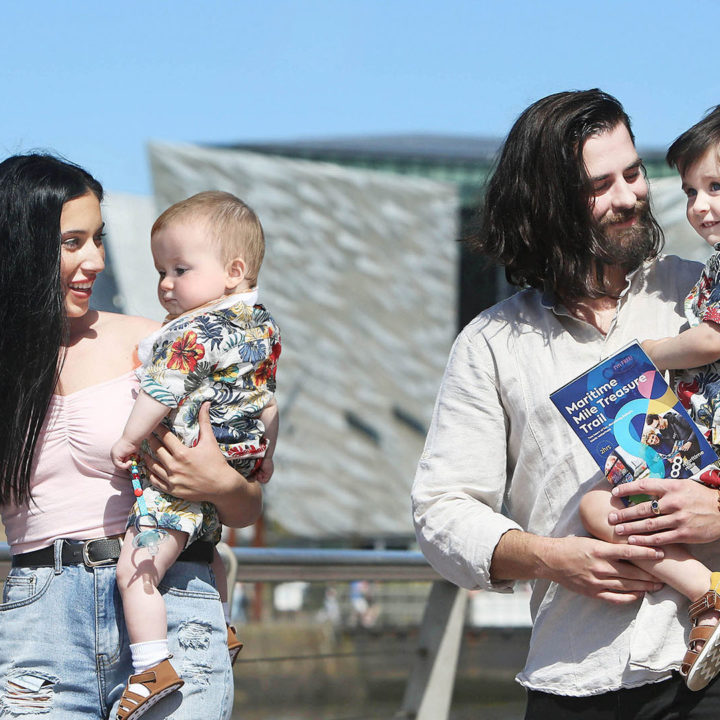 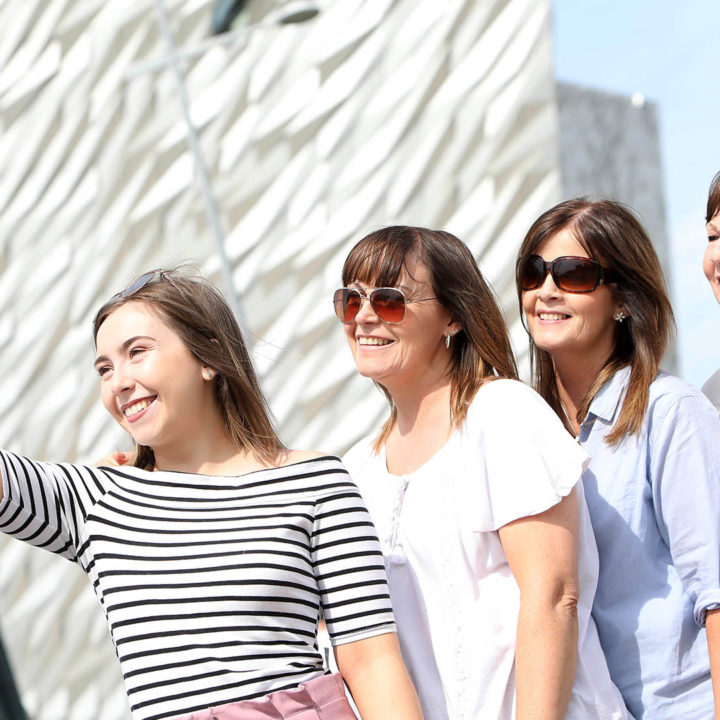