Read about Rodney McCullough's amazing 55 year career with Harland and Wolff, as well as how life along the Maritime Mile has changed since 1959!

Tell us a bit about yourself – What was your job role and how long did you work for Harland & Wolff. What was your favourite part of the job?

I worked on Queen’s Island, mainly for H&W, for over 55 years starting in 1959. I was Deputy Company Secretary Pre privatisation in 1989. After privatisation was Group Property and Risk Manager and Company Secretary of the H&W Property Companies. My work scope was legal, contractual, insurance, property management and oversight of Plan Print Dept., Stationery Dept., Photographic Dept and Adult Messenger Service. I was also H&W official historian and responsible for preservation of buildings and artefacts and Coordinator of the production of the official H&W history “Shipbuilders to the World”. I also Coordinator of new vessel formal handover arrangements with Ship-owners.

When someone finds out what you did, or where you are from, what question do they always ask you?

Did the NI Troubles affect H&W?

Do you have any behind the scenes facts / secrets about your time working for H&W?

During Falklands War in 1982, undertaking secret trips to London and Southampton with construction plans of the passenger liner SS Canberra to facilitate the conversion of Canberra to a troopship carrier at a Southampton location for service in the Falkland.

What did you and your work colleagues do for fun / recreation after work?

With a one and quarter hour lunch break, particularly in the 1960’s, playing lawn bowls with office colleagues in the nearby Victoria Park. During the 1960’s, after overtime working at 9.30pm, playing shove halfpenny games on the massive mail table in the Secretary’s Office. That table was normally used for the opening, by Secretary’s Office staff, of bags of mail and sorting that mail each working day. Tradition in Secretary’s Office when the wife of a colleague had an addition to the family, it was the custom for the new Dad to take his male colleagues out for a few drinks and a meal. Usually the evening festivities started in either the Ritz Bar (known as the Canberra Bar) in Station Street, where the flyover is now, or the Rising Tide Bar in the nearby Scrabo Street. Both bars no longer exist. The Canberra Bar was renowned for its chief bartender Molly and her superb vegetable soup and a large glass mural picturing the SS Canberra located behind the bar. The Rising Tide was known for its sawdust strewn floor, it was used both by shipyard workers and Dockers from the nearby Coal Quays.

Where is your most hidden gem along the former shipyard now Titanic Quarter / Maritime Mile?

Not so much a physical “gem”, the memories of the people with whom I worked in the Yard. So many characters, lifetime close friends and the concentration of so much innovative brain power in one location, solution finders. As an example of the latter, the manufacturers of the Concorde airliner were experiencing metallurgical problems with that aircraft which they were unable to resolve despite involving most of the centres of excellence in Europe. It was suggested that the problem be referred to H&W’s Laboratory in Belfast which had a number of metallurgical experts on its staff. That suggestion was taken up and in due course the H&W team came up with a solution to the problem. A credit to Dr Wright and Herbie McCandless who then led the H&W team.

From a physical gem perspective, a simple piece of modern metal artwork in the form of a drum located on the Queen’s Road at the entrance to Channel Commercial Park. Segments of the drum feature the various shipyard trades which once operated in the adjacent Thompson Works area before the successful Channel Commercial Park development within which many former shipyard workers were able to find employment.

What has it been like to see the area develop over the last 40 years?

There have been many challenges and changes over the past 40 years including, as the shipyard contracted, I sadly had to make a significant number of employees redundant and close Departments but then being involved in putting together the initial Masterplan for the regeneration of the redundant shipyard waterfront lands. Of particular satisfaction was putting in place after lengthy negotiations, a new 125 year lease with the Belfast Harbour Commissioners for the new H&W Compact Shipyard in 1989. That was followed by the construction of the first regeneration project Channel Commercial Park in the mid 1990’s, then the establishment of the Northern Ireland Science Park in 2002 now Catalyst .The pride in seeing the way in which Titanic Quarter has come together and the changing landscape with the mix of new landmark buildings and existing historic structures blending together and the creation of many new employment opportunities.

If you owned a boat what would you name it?

Very easy “Pendennis Castle”, named after a passenger/cargo ship with beautiful striking lines built by H&W in 1958 for the South African trade for the Union-Castle Steamship Co.

The pride of continuing my family relationship with H&W through my father, a painter and master grainer for 39 years. Also seeing our son serve his time as a welder with H&W and as he advanced through the Company going on to become Director of Manufacturing with a major British Isles spread group of engineering companies. H&W offered a superb training facility for young people. From an historical perspective, managing the transfer of business records to the N I Public Record Office, the preservation of the unique H&W photographic collection and overseeing the completion of negotiations with the Environment Service for the listing and scheduling of historic buildings and landmark areas. The sadness of closing the main door of the historic H&W HQ Building in 1989 for the last time when we moved to more modern offices beside the Building Dock. 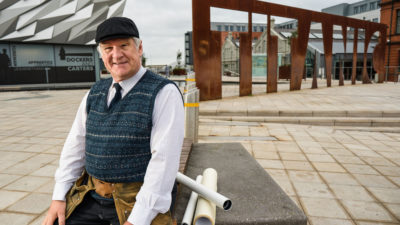 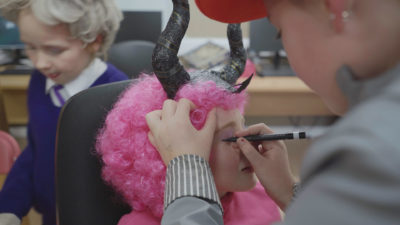 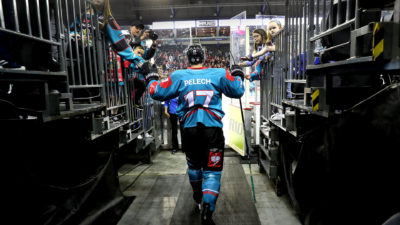